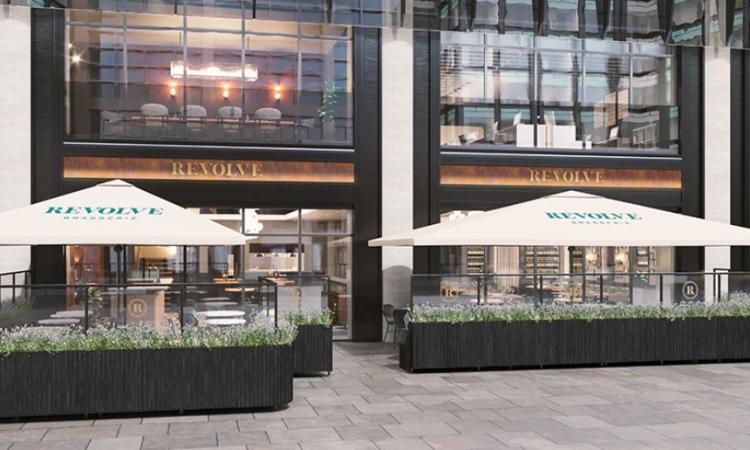 British Land has partnered with Revolve - a lively, modern brasserie - to open its first ever restaurant at Broadgate. Opening in the Spring, Revolve brings a new form of dining experience to Broadgate and the City, featuring a monthly series of guest chefs from the UK and further afield.

Located in 100 Liverpool Street, the modern City brasserie will offer an everyday menu of well-accomplished classic dishes inspired by the brasseries of Paris and New York, an exceptional wine list, and cocktails by an award-winning bar team, complimented by a revolving guest chef programme.

Tris Hillier, CEO, Revolve, commented: “Revolve is our Brasserie Extraordinaire! All the buzz, excitement and energy of the classic brasserie format to delight the City crowd, with an additional layer of unique culinary excellence. We wanted to create a local brasserie with heart, soul and vibrancy where everyone could enjoy wonderful wines and exceptional food but importantly, we also wanted some flexibility to invite our industry Chef friends down to showcase their talents. The concept of Revolve was born and we look forward to sharing fantastic times in the City.”

Alice Keown, Leasing Director - Restaurants and Leisure at British Land, commented: “We’re thrilled to partner with Revolve to open its first ever restaurant at Broadgate. This innovative concept will be the first of its kind in the City, offering an all-day brasserie menu, and transforming into a unique culinary destination on the weekends. As workers continue to return to offices, this provides the perfect place to catch up with colleagues during the day and friends in the evening.

“We’re particularly looking forward to welcoming some amazing chefs that want to grow their brand in London, and potentially expand across our places. Broadgate continues to attract new and exciting brands, with an excellent opportunity for further restaurants to open in the two remaining units at 100 Liverpool Street.”

Located adjacent to Liverpool Street station and surrounded by the creative communities of Shoreditch, Spitalfields and Old Street, as well as the City of London, Broadgate is a well-connected hub for work, shopping, and dining. It is the largest pedestrianised neighbourhood in central London and home to an exciting mix of restaurants, bars and cafes, including Eataly, Portuguese tapas restaurant, Bar Douro, contemporary Spanish small plates restaurant, José Pizzaro, and Nest, the cocktail bar and kitchen by Urban Pubs & Bars.

Revolve will join two more restaurants opening at 100 Liverpool Street this summer, including vegan bar and restaurant, Stem & Glory, and the UK’s first ever Shiro, the Hong-Kong-based contemporary sushi restaurant by Aqua Group.

British Land was advised by Nash Bond and Davis Coffer Lyons on the new lettings.